What is a Public Adjuster?

A Public Adjuster is a person 18 or older licensed by the State whose job is to help homeowners and business owners by fighting against their insurance company and recovering the money they deserve. Excellent results can be achieved if the policyholder is represented by a professional that acts only in benefit of the insured. A good Public Adjuster should analyze and evaluate every Insurance policy confirming appropriate coverages and deductibles before reporting the damage to the insurance company protecting the interests of the Policy Holder.
Currently, 44 states (and the District of Columbia) have in place some form of statutory and/or regulatory scheme which licenses public adjusters. The states that do not are: Alaska, South Dakota, and Wisconsin. Thus, here in the State of Florida Public Adjusters are regulated by the government. 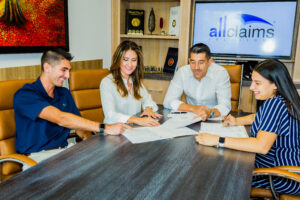 Holding a license in one state only permits the licensed to practice in that state.

How is a Public Adjuster Compensated?

A Public Adjuster is a person that in exchange of a commission aids a Policyholder at the time of property damage against their insurance company, investigating and adjusting the loss.  In the State of Florida all Public Adjusters are capped at 20% of the total amount of the settlement but in an State of Emergency, the fee is reduced to 10% instead. We are very transparent on pricing and allow for a free estimate and consultation. Thus there is no risk to you. Contact our office and let one of our friendly public adjusters come and meet you face-to-face. We service the Fort Lauderdale area, especially communities such as Weston, Miramar, and Davie, Florida. But if you are anywhere in or near Fort Lauderdale, call us for a consultation.

What is an Independent Public Adjuster?

Frequently, here in South Florida, we incur heavy losses. Often floods occur. Sometimes it’s fires. There are many types of natural disasters and weather events, and plus there are more “ordinary” events such as a break in piping or a fire. In these cases, homeowners in communities that we serve such as Weston, Miramar, Pembroke Pines and Davie turn to an “independent public adjuster” to represent their interests against the insurance company. An independent public adjuster works for YOU the homeowner and NOT the insurance company. Thus he or she represents YOUR interests and is not motivated to err on the side of cheapness.

How Much Does a Public Adjuster Cost?

That depends on the ultimate outcome. But the good news is that the first step to finding an independent insurance adjuster here in South Florida is to contact us. We charge ZERO for the initial consultation. We can evaluate your situation and explain the ultimate costs involved. But – generally speaking – we get paid if, and only if, you get paid. Our public adjusters do this every day every week and so we are experts not only in working to get you what you deserve and representing your interests against insurance companies, but in the entire process. We can and will fairly evaluate the costs involved and work hard to get you every penny you deserve in your insurance claim. Whether it’s fire or water, a hurricane or a windstorm, let our insurance adjusters help you protect your rights.

The City of Miramar was incorporated May 26, 1955. At the time of incorporation, the City had a population of less than 200 people. With approximately 2.9 square miles land area, Miramar’s original city boundaries were: Southwest 64th Avenue on the east, University Drive on the west the Dade County Line on the south, and Pembroke Road on the north. They all served until January 1959, at which time the first municipal election was held. Robert Gordon, the 1st Mayor of the City, gave the City its name. “Miramar” means “Look at the Sea” in Spanish (Miramar was an exclusive suburb of Havana in pre-Castro Cuba). The City seal is inscribed with its motto “Beauty and Progress”. Charles F. Knapp was the city’s 1st elected Mayor. He was sworn into office 1 month later. Source: https://www.miramarfl.gov/257/Miramars-History

All Claims Solutions is the loss consulting and public adjusting firm that exclusively works for you, the policyholder. Our best-in-class public adjusters serve South Florida, especially the communities of Weston, Pembroke Pines, and Miramar as well as Davie, Sunrise, Southwest Ranches and Plantation. We are passionate about Florida homes and businesses throughout Broward County and West of Fort Lauderdale, and our insurance adjusters aim to be the top-rated, best insurance adjusters (public adjusters) for each and every client. Let us help you with your insurance claim issues and defend your rights and interests against insurance companies. Contact us today. Sitemap.